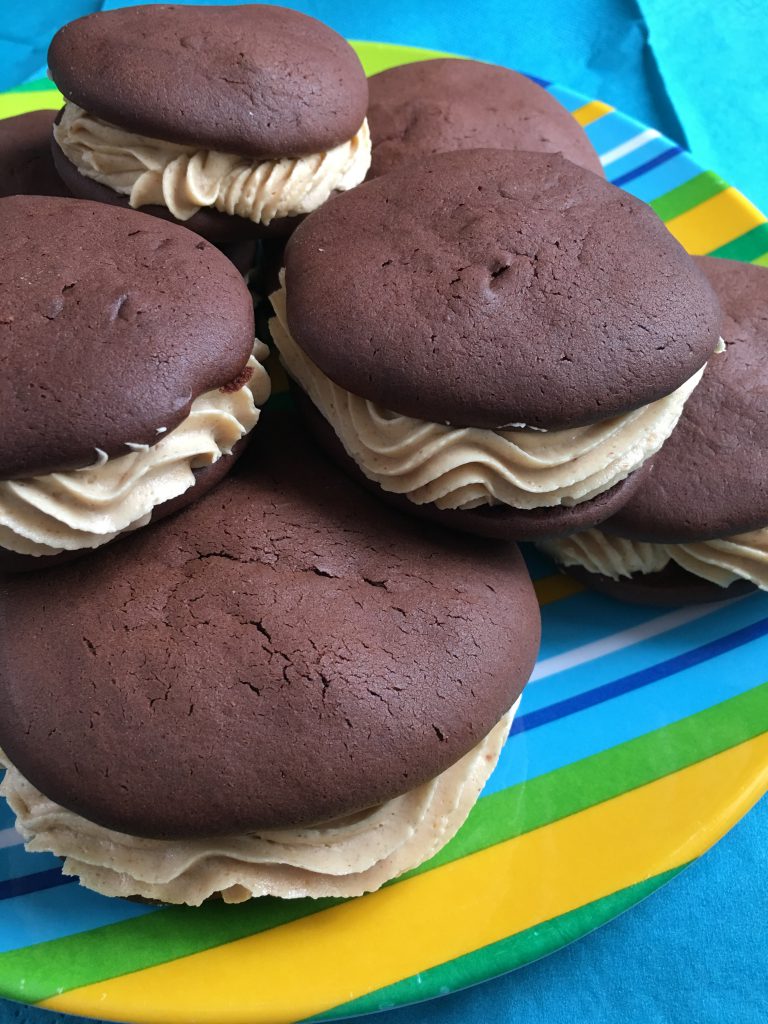 Disclaimer: I take no credit for this recipe. I am sharing it with you because it is just so tasty, that I want you to have a chance to try it too.

I had never tried making whoopie pies before. I’m not sure why not. perhaps I didn’t want to go through all the steps? Maybe it was because they resembled the “wagon wheels” that are part of the same food family as Twinkies. 😛

Regardless of the reason, an article in a recent edition of Canadian Living convinced me to give them a shot. (These are from Anna Olson’s new cookbook, which no doubt has some other tasty treats hidden within the pages.)

If you follow the recipe to a “t”, you will have a bunch of very tasty treats on your hands. The first step tells you to put the pans in the oven to warm them up. This really does make a difference, so don’t skip that step! In the 3rd step, it tells you to beat the batter for a couple of minutes after everything is combined. This is necessary as it helps get the batter in the correct state for success. One thing that I would change from the recipe, though, is the size of batter you drop on the pans. The recipe suggests you use a medium ice cream scoop. For me, that was completely impractical because the batter stuck like crazy and, being an ice cream scoop, it was nearly impossible to scrape the batter out (no, I don’t have a scoop with the handy thumb activated scraper…). I switched to two tablespoons from my cutlery drawer.

I prefer portion sizes smaller than what they suggested in the recipe. If you follow the recipe and make only 16-20 portions, you will have some very large “pies” – about 4 inches in diameter. My first scoops were the suggested size, but because the batter spreads as it bakes and they turned out much larger than I was anticipating. After seeing how big the first ones were getting, I decided to make the second pan a bit smaller, which turned out to be more to my liking.

If you make smaller portions, just remember to cut your baking time down accordingly. With tablespoon scoops, I baked them about 11 minutes. Over-baking is not good, so watch them carefully. The idea is to have soft, cupcake-like cookies. The filling is very similar to making icing for cakes, but with a bit less sugar. Again, following the instructions in step 4, especially beating the icing well for each step will make your filling light and creamy. If you don’t have an icing tip or bag for piping the filling, don’t worry as you can also spread it using a knife or spatula – just make it nice and thick (about ½”).

I really enjoyed trying these new treats. I thought they were very tasty, soft and creamy with just the right chocolate and peanut butter ratio. I hope you enjoy them too! Let me know if you tried them and if you have any suggestions for other flavours of filling you could put in – Nutella? Chai Tea? Vanilla? Orange Buttercream? Mint? Leave your comments below…