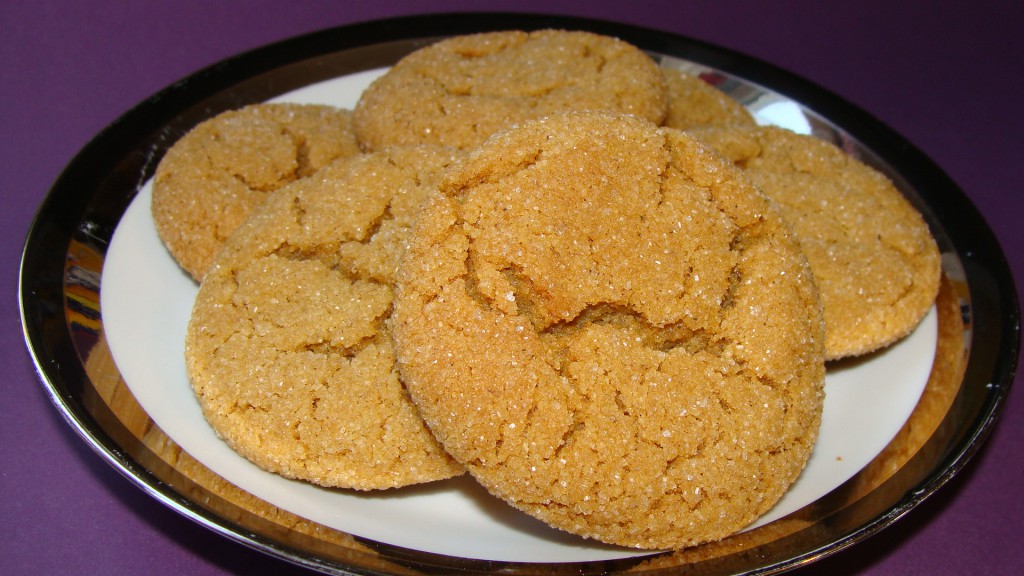 Crackly, sugar-topped spicy ginger cookies.  Since I was a kid, they have been my favourite cookie to dip into milk (sorry chocolate chip).  My Dad used to buy the hard and very spicy “snap” version when I was younger.  I guess that’s why I used to dip them – it softened them and made the spice bearable for my young tongue.

But this version is soft and has just the right amount of spice.  (Of course, if you prefer a harder version, you can just bake them a bit longer.) Ginger Zingers ready for the oven

When I made this particular batch, it was the night before the last day of school and I had forgotten to make the teacher treats.  So there I was, in a rather dark kitchen, rolling little balls of dough in the sugar and waiting for them to be cooked so I could go to bed and get up early one last time before the kids were home permanently for two months.

I was rather disappointed when I realized that they weren’t baking the way they were supposed to.  (Told you that not everything works out for me!)  Instead of puffing up nice and big and crackling on the top, they were just sort of mushing down and staying small.

Panic briefly made me wonder how late I would actually be staying up that night, but common sense prevailed and I figured I had better try on just to see if they still tasted okay. (This was probably unnecessary since I had already tested the dough – more than once!)

I was happy to discover that although they didn’t spread properly, they were still tasty and reasonably soft.  Crisis was averted and they promptly went into paper bags for the following morning’s distribution. But I did wonder exactly what had gone wrong.  I had made these cookies dozens of time before and most of the time they turned out the way they were supposed to.

I was puzzled, so I did what everyone does: I googled it.  Three different theories were presented – one, that the butter was too cold and didn’t allow the cookies to spread properly; two – I had mixed the dough too much with the mixer and made them “tough”; or three – the leaveners were bad and had not been able to work their magic of making the dough rise in the oven.

I knew the leaveners were good – I had just bought them a couple of months prior.  I also knew I hadn’t mixed the dough any more than usual, so that theory was unlikely.  By process of elimination, it must have been the butter temperature.

That possibility rang true since the butter was barely room temperature.  The day hadn’t been very warm and the sun had already set, with the cool of the evening coming in through my windows, cooling the house down even more.  I thought about it and realized that the butter had been rather stiff in the mixer and the mixer was working a little harder than usual.

I haven’t made the cookies since, although I intended to do so before writing this post, but life has again gotten in the way. I figured posting this recipe, which I have successfully made many times before, was more important. I will, however, update you when I make them again, making sure the butter is sufficiently soft. Yields 2
Chewy, spicy, ginger cookie snack with a crackly top
Write a review
Save Recipe
Print
Cook Time
10 min
Cook Time
10 min
Ingredients
Instructions
Notes
By Mary-Lee
SweetieTreats https://sweetietreats.ca/
Let me know how yours turn out.  I’d love to hear your stories!  Did the temperature of the butter make a difference?  How gooey did your hands get when rolling out the balls?  Just leave a comment below.
Posted in Coffee-Time Treats, Cookies, For A Crowd, Lunch Box Favorites, Party Favorites, Snacks and tagged cookies, ginger, spice