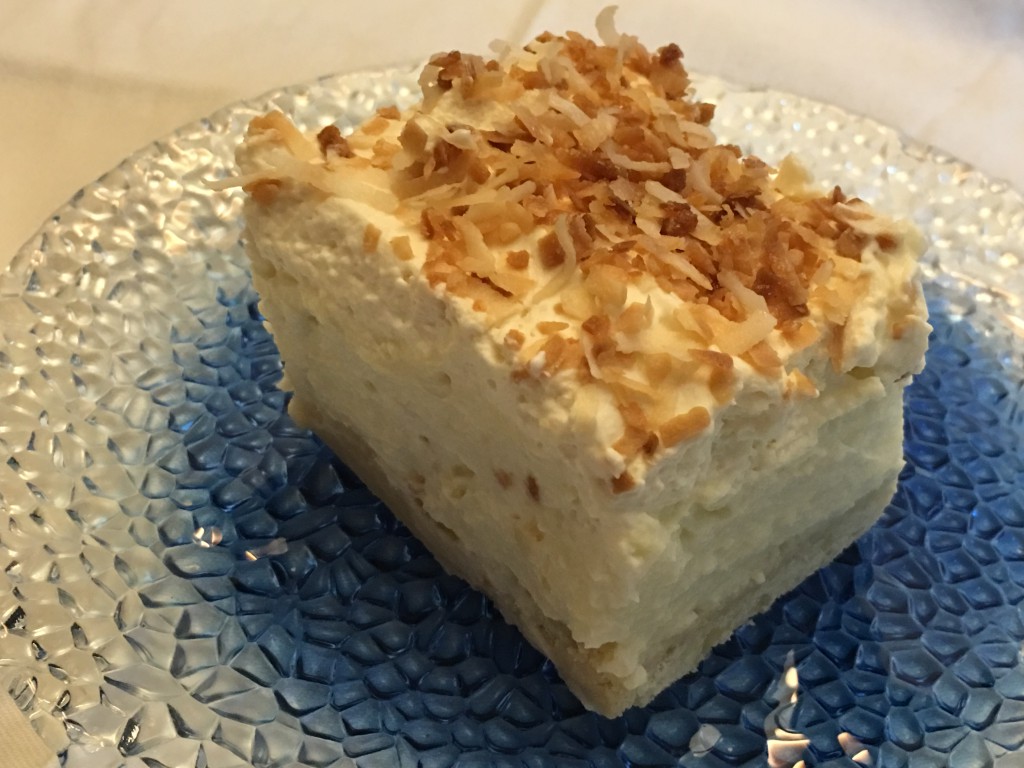 There are two kinds of pies I have liked since I was a kid: coconut cream and banana cream. I used to look eagerly at restaurant menus to determine if I’d bother trying to convince my parents that we should have dessert or not. This recipe is a very good substitute for coconut cream pie. It is rich, creamy and full of coconut.

As much as I loved the pudding-like pies, the one thing that I wasn’t crazy about was whipped cream. If the slice of pie came with half of its height composed of whipped cream, I would dutifully scrape it off on the side of my plate before eating anything else. It’s taken me quite a while to change my mind about that (I still don’t want too much at one time) but now I appreciate the cool airiness that whipped cream adds. This dessert has just the right amount of whipped cream on top (in my opinion). Of course, you can always add more, or less, depending on your preferences. But, if you do add more, just remember that it will start to become higher than the pan sides and spill over the top, so putting foil or parchment paper above the edges will be necessary.

When you are making the whipped cream, here are a few tips:
– It helps the process along if you stick your bowl and beater in the freezer for a few minutes before hand.
– The cooler your whipping cream, the better as well.
– Use a wire whisk attachment with the highest setting on your mixer.
– When soft peaks form, you can add vanilla and icing sugar before beating more until firmer peaks form.
– Don’t beat for so long that it turns into butter – yep, butter. If that happens, you’ll have to start over again. If you don’t have whipping cream on hand, or you don’t feel like making it, you can usually substitute a “dessert topping” like Cool Whip in place of whipped cream. It may make it a little sweeter, but usually you won’t notice a difference.

Toasting the coconut is another thing that I have struggled with in the past – but mostly because I have attempted the oven-baking method. I have found that toasting it in a non-stick frying pan is much easier and less likely to burn. You can actually see and control the toasting. If you’ve never done it before, just remember that it takes a long time before it starts to brown, but when it finally starts to turn, it does it quickly, so watch out!

You can watch a quick demonstration of how to make this dessert here.