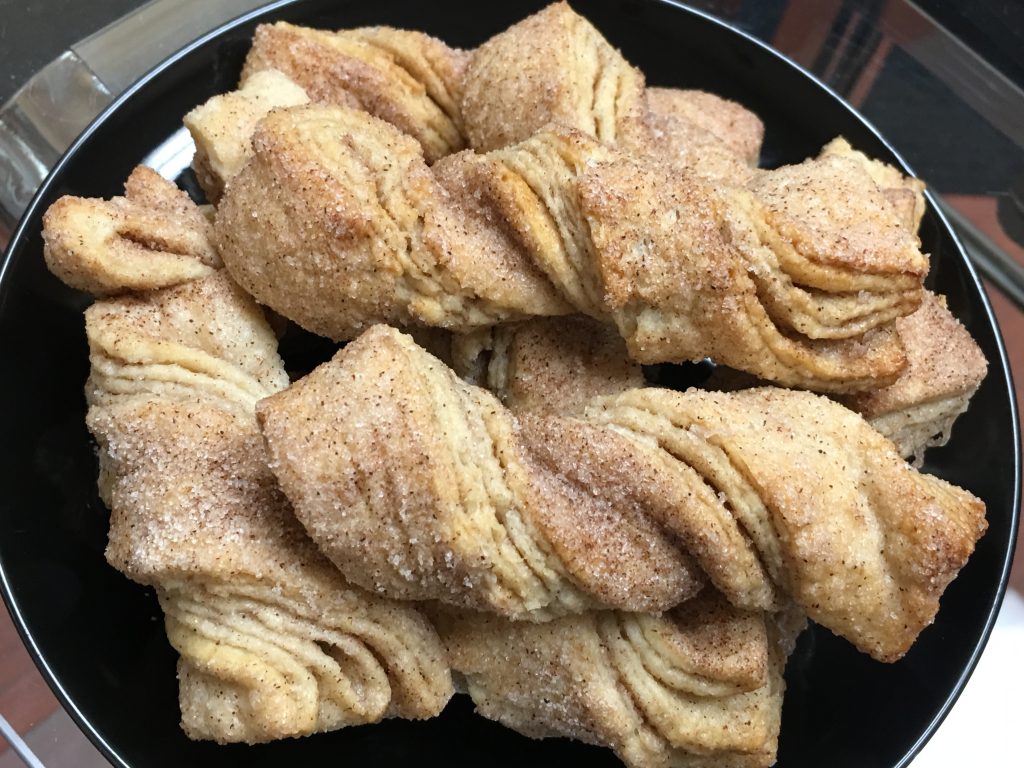 Yesterday was not one of my better baking days. It might have been, but it went haywire after I left for a couple of hours, with some of these tasty sour cream twists in the oven. To be clear: I didn’t leave them unattended, but it turns out that I may as well have. I left someone in my family (who shall remain nameless) in charge of taking the last batch out of the oven. There were only 20 minutes left on the timer, so I figured this would be a simple task that wouldn’t leave them in the kitchen for too long. (And they have been reliable to do so in the past on many occasions!) However, to my dismay, when I returned home all I could smell was burnt sugar. I was dismayed and assumed that they must have gotten a little burnt on the bottom, which happens sometimes if the oven is too hot or if you leave them in for a little too long. I surveyed the kitchen, expecting to see some bottom-blackened twists on the cooling rack, but they weren’t there. I checked the containers that I had left out for them to be packed in, but they remained empty.

Still unaware of where the twists might be hidden, I turned to the oven and saw that it was still on. I was concerned that it had never been turned off, but sometimes I forget too. So, I turned it off and opened it up to see if any sugar had been spilled to cause the terrible smell.

What I discovered was the blackened remains of the twists. They had been baking ever since I left the house! After I doused them with water in the sink I discovered they had turned black, through and through. Not one bit could be salvaged. So, one third of my recipe was “toast”. Then I tried to find the other twists that had been left on the cooling rack. They were nowhere to be found – apparently our counter-surfing dog had made quick work of them while the kitchen had been vacated. Only one pan (of three!) had survived. I can only imagine that it survived because of their placement on the hot oven and the dog wasn’t willing to get too close to the heat.

As a result, I was left with only one dozen twists (of the original three dozen) and a very disappointed family. I had originally made them to celebrate a co-worker’s birthday so the survivors all went to the office. My family ended up with only one each, after the office visit.

When you do actually get a good taste of them, they are light and flaky and have just the right amount of sweetness. I think I’ll have to make a new batch tomorrow – and make sure that they aren’t left unattended! Yields 36
A light and flaky pastry treat with just the right amount of sugar and a hint of cinnamon.
Write a review
Save Recipe
Print
Ingredients
Instructions
Notes
By Mary-Lee
SweetieTreats https://sweetietreats.ca/
Let me know how they turn out for you. Do you think the sweetness is just right? Leave  your comments below…
Posted in Coffee-Time Treats, Cookies, For A Crowd, Lunch Box Favorites, Party Favorites, Snacks