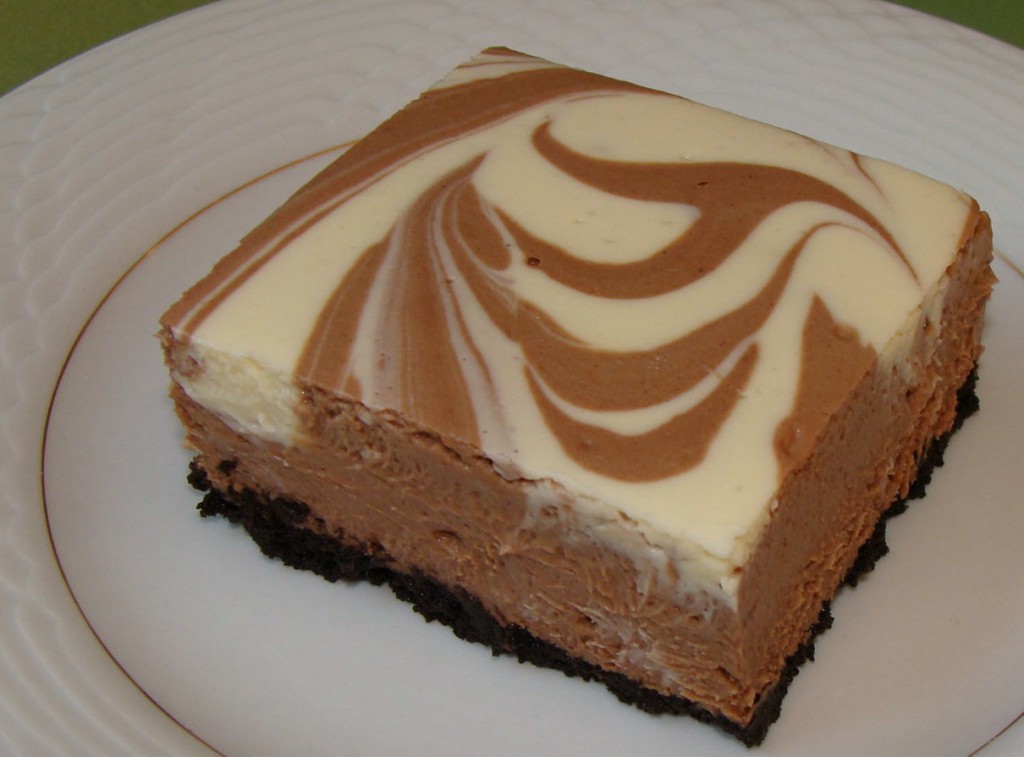 So, what do you do when you realize you’re missing a key ingredient?

Occasionally I’ll panic and search the internet for alternative recipes that omit whatever ingredient I’m missing.  Or I’ll just change what I was making entirely.

Other times I’ll run to the store, but that option doesn’t happen very often since I live a good 15 minute drive from the nearest grocery store in town.

And once in a blue moon, I’ll try a Google-suggested substitute for that ingredient and hope that it doesn’t change the recipe too much.

This has worked in my favour from time to time.  My Banana Chocolate Chip Muffins are one example of that – I had run out of butter and decided to give the olive oil substitution a try.  To my pleasant surprise, it worked well and now I generally use olive oil, rather than butter in that recipe.

This past Friday evening I was in a panic.  I had already creamed the cream cheese and sugar for marble cheesecake squares when I realized that I had not purchased sour cream. Being 9:00pm, I knew that stores were likely closed already, and besides, I didn’t feel like driving that late at night just to get sour cream. So, I tried to think of what I could possibly substitute.  Thankfully, I had been doing some “research” on Pinterest earlier that week and remembered an infographic of substitutes for ingredients.  Yogurt could save me!  And wouldn’t you know it, there were lots of little containers of it sitting neglected in my fridge (apparently the kids don’t like the vanilla flavour).  I could kill two birds with one stone – use up some yogurt before it expired AND finish the recipe that night! I breathed a sigh of relief.

Then I started making the crust and realized that I was short on Oreo crumbs… this just wasn’t my night for baking!  Thankfully I had enough graham crumbs to make up the difference.  I hoped that nobody would notice.

(For the record – nobody said anything so they probably didn’t notice, but I could tell that it tasted a bit different – and I could feel the little bran-skin stuff that it’s made with.)

But, two ingredient substitutions in, I soldiered on and even remembered to reserve the cup of batter before I added the chocolate – yet another substitute! – Chocolate chips rather than baking chocolate.  (If you’re keeping track, that’s three total substitutes! – not a good day/night in my kitchen.) Different steps of putting the marble cheesecake together

Somehow, I managed to get the completed batter into the oven without needing to make more substitutes (thankfully I had enough eggs!) and took it out of the oven, satisfied, when it still jiggled in the middle (often it will cook a bit too long and get more “set” in the centre, which I find a little dry).

After that story, you’d be forgiven for thinking that I was making this on a whim, but I had decided much earlier in the week to make it.  Sadly, the only prep I did remember to do was to buy cream cheese and to let it warm up to room temperature!

My daughter was very happy to see it for her birthday cake that Sunday.  By then, the flavours had blended together nicely and the chocolatey goodness I love was as smooth and tasty as ever.  Nobody commented that the crust was flecked with golden crumbs; nobody complained that it was too “vanilla-y” and everyone agreed that it really hit the spot.

My conclusion: substituting vanilla yogurt worked out just fine.  I was worried that the vanilla flavour might be bit too strong, but it was muted by the cream cheese and chocolate.  I think a Greek yogurt – plain or vanilla would work better and keep the batter a little thicker, just as sour cream would. Serves 15
Baked cheesecake with a delicious vanilla & chocolate marbleized batter.
Write a review
Save Recipe
Print
Cook Time
40 min
Cook Time
40 min
Ingredients
Instructions
Notes
By Mary-Lee
SweetieTreats https://sweetietreats.ca/
Tell me below what kind of substitutions you have been forced to make when you’re stuck in the middle of a recipe.  I would love to know what you used and how the recipes turned out.
Posted in Cakes, Cheesecakes, Chocolate, Coffee-Time Treats, Desserts, For A Crowd, Party Favorites, Squares